What surprises us about Andy McMillan is his ability to shift seamlessly between journalistic and fine art photography (you may have seen his recent Sunday New York Times above-the-fold feature on the funeral of Thomas Duncan). Today we’re happy to share this interview with Andy about his life, his practice, and his most recent non-journalistic work, which is a continuation of his progress made as a resident at the McColl Center for Art + Innovation. Andy’s most recent series is simply about men in space; he is concerned with and questions the ways males are represented in portraiture. We dare you to not become intrigued with these perfectly un-special subjects, men he oftentimes barely knows that sit for his photographs.

Enjoy reading this interview and be sure to keep an eye out for Andy, both in the papers and in the galleries.

HappeningsCLT: Describe yourself in three words.

Andy McMillan: This old thing?
HCLT: Who or what inspires you artistically?
AM: I think there are two basic categories of creative experience that drive me to make new work (or go back and throw away all of my old work): seeing something that seems singular and new like Roger Ballen’s pictures (from Shadow Chamber) or Paul Graham’s incredible series The Present. Or seeing something that’s so well done and fully developed that it makes me want to work harder and be a harsher self-critic. This is how I felt after seeing Bill Callahan on his last tour for the album Dream River.
In general I take a lot of inspiration from music, fiction, comedy and of course, life itself. While shooting for the last year or so, I’ve been unable to escape the Silver Jews song Horseleg Swastikas, specifically a few lines that I imagine describe a hangover:

Being a photographer, I love how David Berman (the writer/singer) describes light’s impact as something violent and physical. Before computers gave us the ability to make photographic images that seem permanently latent, photography was just light’s physical toll. 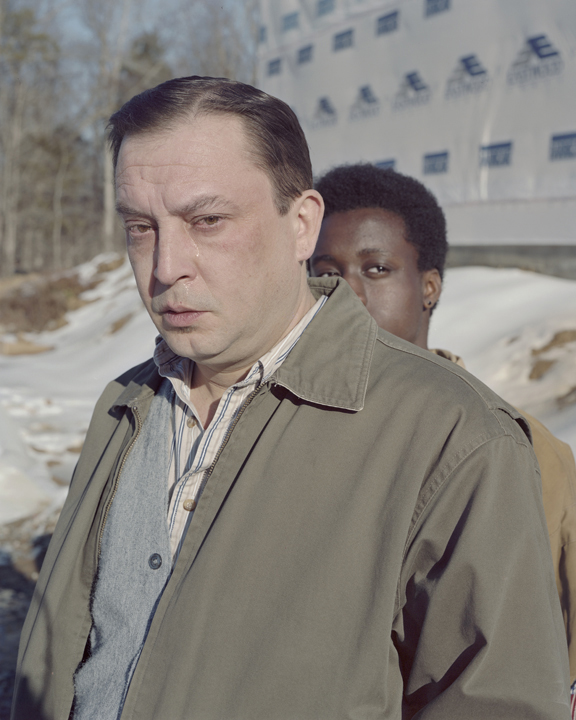 HCLT: What do you think is the most valuable art experience in the Carolinas?
AM: That’s a tough one. We have institutions like The Light Factory that are run by passionate and hard-working professionals. And I think that several of the Universities in the area, like Davidson, UNCG and Duke, have put on excellent shows. But I’ve probably gotten the most out of talking Art with good friends like Eric Hurtgen or Dan Romanoski.
HCLT: When did you realize you were an artist?

AM: I can’t really pinpoint the exact second. I’ve had a lot of moments where I thought “Oh, I’ll be a basketball player” or “I should be a war photographer.” But being an artist seems like something I’ve just naturally settled into. The process was probably like when a dog spins in circles before plopping down and going to sleep.

HCLT: Tell us about your current body of work?
AM: I’m making portraits in two different ways right now. The first is in strong, directional light where the sitter is kind of uncomfortable. The subjects, squint, sweat, stare blankly and sometimes their eyes water. The pictures represent my interest in the physical affects of light on the body.
I also have a series that I’ve been working on for a while that looks at how men relate to space. I make environmental portraits of men that I meet online and on the street. I hope that the struggle between flatness and depth in these photographs says something meaningful about how people are here one day and gone the next.
HCLT: Best meal in Charlotte?
AM: My most often ordered meal in Charlotte would be the pesto pizza w/chicken at Pure Pizza.

HCLT: What book is on your nightstand right now?
AM: I’m currently ignoring How to Be Your Dog’s Best Friend: The Classic Training Manual for Dog Owners by the Monks of New Skete and Philip Roth’s American Pastoral.
HCLT: What three things would you take with you to a deserted island?
AM: It’s VERY selfish to bring people, right? My dog, Rabbit, a skillet and Ulysses because I’d probably have to be on a deserted island to read it all the way through. For the record, I’d prefer a desserted island.

HCLT: What is up next?
AM: Work, work, work and hopefully applying to grad school in January.