The Revival of Queen Charlotte: a public art commission bringing culture and conversation to Uptown Charlotte 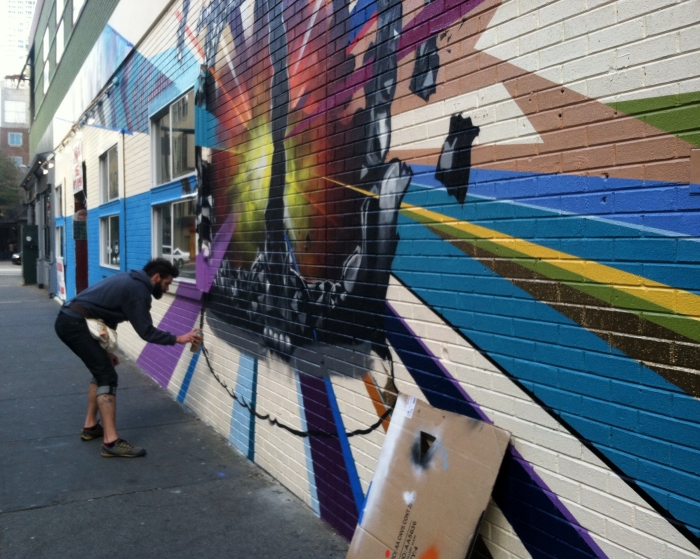 Whether hustling to a lunch meeting or taking a city stroll, people can’t help but stop to gawk at the mural currently in progress near the corner of 5th and North Tryon streets in Uptown Charlotte. Projected to be complete at the end of February, one of Charlotte’s favorite bars – Phil’s Tavern – will boast an intricately expansive mural in the place of its recently renovated wainscoted facade.

Under the new management at Phil’s Tavern, local artists and frequent collaborators Matt Hooker and Matt Moore were commissioned to create this mural, which highlights the history of Queen Charlotte and elements of the city that make it unique.

The mural narrates the rapid growth and change taking place throughout the city. Queen Charlotte, modeled after a friend of the artists,  presses a TNT detonator, leading to a trail of colorful lines from building entrance, down the sidewalk, and over to an exploding crown on the other side of the bar’s main door. Launching from the larger-than-life crown are layers of bold color and imagery referencing all-things Charlotte.

Throughout this collaborative art-making process, the artists managed to create an evenly balanced work load. Splitting the labor, both artists are able to “implicitly trust” in each other’s painting skill and technique. Having adopted a rotating schedule in which one paints during the daytime and the other puts later hours into the night, it’s becoming quite a spectacle for the people of uptown.

And while they’ve been working in solitude most times, it’s the uptown Charlottean bystanders, buzzing about the curious new public work, that keep these artists company. Hooker says that even in the slower, early stages of the project, people began sharing their thoughts on how positively significant an impact the mural has on the city’s overall appearance and aura. Most passers-by have been complimenting the artists on their talents, yet some questioned their permissions to create the masterful street art.

Referencing recent travels to the Wynwood neighborhood of Miami and its appreciation for large public displays of art, Hooker says graffiti and street art have “gone from this underground thing to something that is sought after” and celebrated as a means of creating culture for a city. In this case connectedness among Charlotte’s various divided neighborhoods and social groups.

With Charlotte being one of the fastest growing cities in the country, it’s not a surprise that this large-scale mural is proving to be a much appreciated addition to the city’s rather conservative overtones. Judging by current reactions, the city is embracing its latest public work of art.