This Independence Day we wanted to take a minute to step away from our cookouts and fireworks to consider how artists celebrate American freedom. To do this we each picked one of our favorite patriotic works of art.

We want to here from you too!  Respond in the comments – what is your favorite patriotic work of art?

Ahhh, Americana.  This is piece is  a bit a flash back Friday to a simpler time – of long road trips across the country, stopping at service stations along the way. Edward Ruscha documented his travel from his home in LA to visit his parents in Oklahoma. Published in 1963, it is widely considered one of the first modern artist books. Only 400 issues were printed in the first edition and they sold for only $3 each according to an ad in Artforum Magzine.  Now one of these babies can cost you up to $20,000!

Want to take a trip down Route 66. Click below to flip through some pages from the book.

This work by David Hammons was created in 1990 and is part of the permanent collection at the Museum of Modern Art. A second version hangs in Harlem, outside of the Studio Museum. The flag utilizes the Pan African color scheme — red, green and black (and sometimes gold), seen in the flags of many African countries. The scheme was also adopted by Marcus Garvey for the Universal Negro Improvement Association founded in the 1920s. The UNIA flag is said to include red for the blood that unites all Africans, black to represent the people, and green for the richness of the land left behind. For Hammons, mixing the UNIA or Black Liberation Flag with the traditional American flag, is a way of asserting his identity as a Black American, a comment particularly poignant in the midst of the confederate flag controversy today.

Particularly interesting to me is the connection to Jasper Johns’ Moratorium painted 21 years earlier in 1969. Johns’ flag boasts a similar enough color scheme: black stars on an orange background, with camouflage and black stripes. There is a white dot near the center thought to represent a bullet hole. Moratorium, a spin on the more traditional flags Johns had painted previously, was a critique of the Vietnam War. 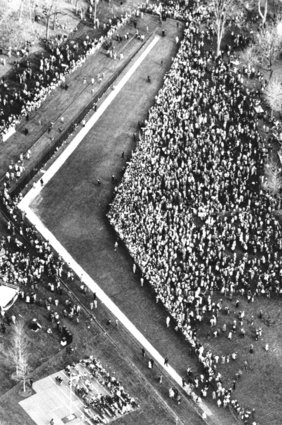 One of the most poignant and controversial works of public art and monuments is the Vietnam Veteran’s Memorial by artist and architect, Maya Lin. The then 20 year old artist won the design commission by a unanimous vote while still a student at Yale. The “scar” in the earth, as it was called by its protesters is a  246′ 9″ long wall made of Gabbro and engraved with the names of 58,300 Americans killed or missing in action. It marked a shift in the development of public art and memorials by providing something that offered reflection on death and war in a modern, quiet, and different way than traditional figurative sculptural monuments.

And the “scar” criticism – this is actually the intent. The gash in the land is meant to represent a healing wound, just as this monument is here to provide a place for contemplation and healing to a country that is wounded by war.

read this: Making the Memorial
by: Maya Lin