The House That Modernism Built opens at the Bechtler Museum of Modern Art on March 24th, and will feature some mid-20th century art, furniture, textiles, and ceramics from the museum’s own collection, along with loans from private collectors, the Herman Miller Archives, Eames, and the Gregg Museum of Art & Design at NC State University.

The exhibition, curated by Jen Edwards, spans 1920-1980, and primarily focuses on process, exploring how designers and artists approached their works. Thus, visitors will find many plans and prototypes alongside manufactured works. Although the exhibition is international in scope, Edwards was sure to  highlight innovation and production in North Carolina.

You’ll have to visit the museum to see the full range of works from artists and designers such as Kenneth Noland, Roy Lichteinstein,  Charles and Ray Eames, and more. But now, your HappeningsCLT exclusive sneak peek: installation shots of a geodesic dome, donated by David and Cassandra Wagner (installed by David and his son Karl). The dome, one of Buckminster Fuller‘s greatest legacies, has North Carolina ties as well. Fuller attempted to raise his first dome based on geodesic geometry at Black Mountain College during the summer session of 1948, with the help students and other faculty, including Josef Albers and Elaine deKooning. (By the way, that initial dome failed and deKooning named it the Supine Dome.)

Enjoy these photos. We hope to have more to report about the exhibition soon! 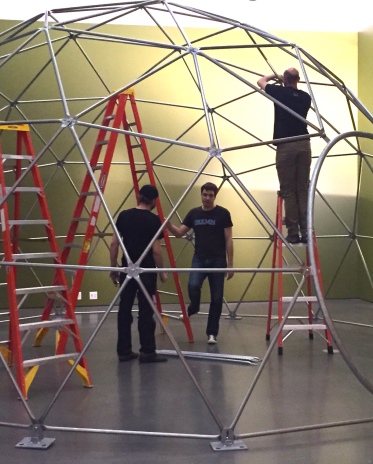 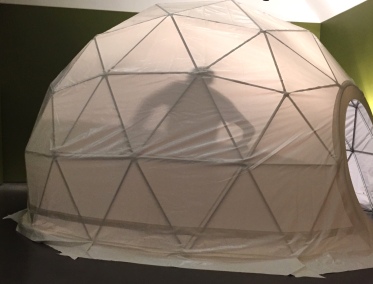