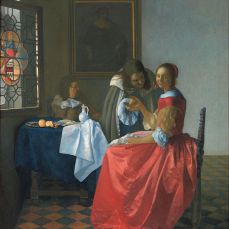 The life of one of history’s most beloved artists, Johannes Vermeer is a mysterious paradox.  Looking at the artist’s serene, quiet, and sometimes humorous paintings you wouldn’t know that they were made in the violent years prior to one of Europe’s most terrible wars in a home full of 11 rambunctious children, a nagging spouse and disapproving mother in law. Maybe one could even draw a comparison between Vermeer and present day social media celebrities who thrive on presenting only the beautiful moments in their lives, and hiding the harsh reality that they actually deal with in the day to day.

One of the keys to learning more about the artist’s life in the late 15th Century Netherlands were the legal records surrounding Vermeer’s wife, Catharina Bolnes. Bolnes came from a wealthy family and gave birth to 15 children, 4 of whom died as infants.  When Vermeer died in 1675, leaving the family of 12 penniless and in debt, Bolnes appealed to the High Court, asking for debt forgiveness. From this record, the contents of the artists home were documented and sold.

On Tuesday, March 22nd, McColl Center for Art and Innovation continues their New Frequencies series with Peter Thompson’s Lowlands. This documentary chronicles the the artists life in Delft, Netherlands, during the tumultuous years of the France/Netherlands war and juxtaposes it with a mid 1990’s trial. For anyone interested in the life of Vermeer, Lowlands provides an alternative perspective to the serenity found in Vermeer’s paintings.

The filmmaker, Peter Thompson said about the film:

Lowlands is a feature cinematic essay that moves between chronological and geographical zones and events including the 1996 trial of a Bosnian Serb for crimes against humanity, the paintings of Johannes Vermeer, and the relationships between them. The film culminates in a dream by Catharina Bolnes, the widow of Johannes Vermeer, embodied in a contemporary chamber opera/masque.

To learn more about the film – read this blog by New Frequencies Curators, Jeff Jackson and Ross Willbanks. (Side note… After seeing the film, Jackson has been quoted saying that Delft during the time of Vermeer was like something out of “Mad Max. ” – this alone makes us want to see the film)