This installment of our Curator’s Pick post – basically, a “best of” or “favorite” pick by a local curator from the works currently on view at their own institution or elsewhere in the Charlotte area, is from Marisa J. Pascucci. Marisa holds double master’s degrees in art history and museum studies from the joint program between Case Western Reserve University and the Cleveland Museum of Art. She has worked at several museums over the last 18 years including the Cleveland Museum of Art, MOCA Cleveland, Montgomery Museum of Fine Arts (Alabama), Everson Museum of Art (Syracuse, NY), Norton Museum of Art, and Boca Raton Museum of Art. We feel pretty lucky that she now calls Mecklenburg County home! In February, she joined the New Gallery of Modern Art as Director of Programs.

Marisa’s Curator’s Pick spotlights a work of art now on view at the Harvey B. Gantt Center for African American Arts + Culture:

Here’s what Marisa had to say about this work that captured her attention:

Being fortunate enough to have worked with Jonathan Green and his paintings at two of my previous institutions, I immediately thought of him for my first HappeningsCLT post when I saw his painting featured in the Gantt Center’s advertising of the Hewitt Collection exhibition. Upon entering the gallery moments after the Center opened on a Saturday morning, I was instantly struck by the instrumental jazz music piped into the space. (Not having the keen ear for music as I do the eye for art, Shazam told me I was enjoying John Coltrane, Chick Corea, and Oliver Nelson, among others.) A welcomed, sensory experience as I took in the 40+ works hanging on the four walls.

Folding Sheets stands out in this compact exhibition, aptly titled Inspire & Instill. The large, billowing swaths of white that make up nearly the entire composition seize and captivate your attention. Green is known for portraying memories from his childhood. When I contacted him regarding Folding Sheets and this blog, he elaborated that Folding Sheets “was one of six paintings that were painted in 1989 around the subject of washing clothes and laundry which captured my recollections of my early life in Gardens Corner, South Carolina. Since 1988 I have continued to create several paintings with themes every year capturing rural community life around washing sheets.” In his exceedingly capable hands this seemingly mundane activity becomes a swirl of activity, and at the same time a footnote documenting the staples of summer fashion in the south necessitated by its heat – wide-brimmed straw hats and sleeveless, light-colored dresses. The sheets and dresses billow in complimentary movement, as the two black women work together to fold the sizeable textiles. Accents of blue make up the piping and waistband of the dress in the front and is carried through the middle ground to the tonal highlights of the other woman’s dress and the sheets, and finally to the thin strip of sky at the very top. The use of this one accent color unites the composition, guiding your eye from one section to the next as you contemplate the entire canvas, which then for a moment gives you the sensation of the high temperatures and hot breezes that typify southern summers.

Thanks to Marisa for giving us such a vivid, engaging description of this painting! Check out Jonathan Green’s painting, Folding Sheets, along with a number of other works from the John & Vivian Hewitt Collection of African American Art currently on view at the Gantt Center through January 22, 2018. 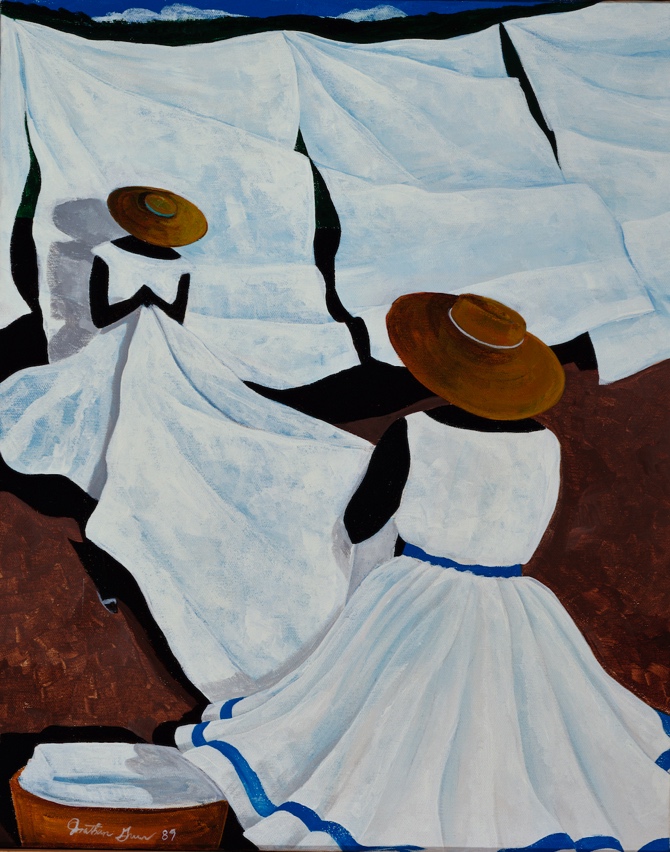